View in her Family Tree

View in her husbands Family Tree


Alice Mary was Kitty’s sister.  She was a small lady so people called her Doll. She is seen her holding her baby daughter Renee.

She worked at the Strand Palace Hotel as a waitress where she met and later married the chef David T Rockcliffe. They had two children, the above-mentioned Renee and David E Rockliffe. 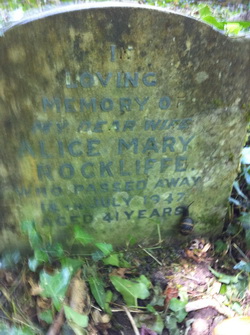 Alice died of cancer at the age of 41 on July 14th 1947.  She was laid to rest in Islington Cemetery, East Finchley. The above inscription reads "In Loving Memory of My Dear Wife Alice Mary Rockliffe who passed away 14th July 1947 Aged 41 Years"