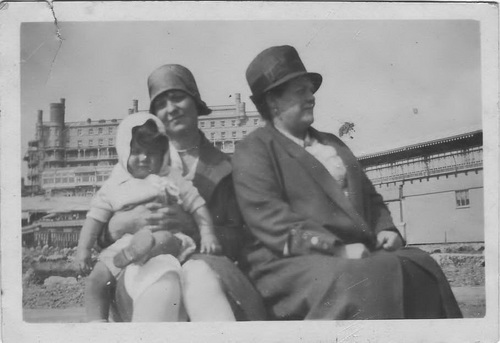 Alice Binning   is on the right in this photo. Alice Binning married Edward John Peterson in 1905. So she was my maternal grandmother. Alice's mother was the mysterious Amelia Green.

In this photo we see Alice's daughter, named Alice Mary (often called "Doll" as she was small), holding baby Renee

Alice's father Francis Binning was Scottish and had his own antiques and picture framing business.

Alice died in 1951 when I was just three so I have no clear memory of her.

The picture was clearly taken at Southend-on-Sea because you can see the splendid Hotel Metropole in the background and below is an early picture of the hotel.

Hotel Metropole - It naturally took a while to build, but this huge hotel dominating the Southend seafront came alive in 1904.  It changed its name not long after to the Palace Hotel.  It famously played its part through both wars as a military hospital.  Today it still dominates the Southend seafront and is being rejuvenated and brought back to life as a first class hotel.

See here for more on Southend-on-Sea